I assure you that this blog is not about astral projections, but about the mindblowing discovery on how birds can sleep-fly without bumping into trees. So, here you go! I have given away the suspense. Nonetheless, do read along as I cherish my love for sleeping and long-standing collaboration with Ipsa Jain.

A few years back, I got the chance to visit Sultanpur Bird Sanctuary, India. It is a magical place to be. Every winter, around 250 species of birds and 1 enthusiastic Homo species known as Bird watchers confluence in the park. Both playing one’s cards close to their chest; displaying their magnificence, skills and power.

Then there is me fighting off my early morning slumber, and continuously bickering about how long can it possibly take to reach the park through the infamous Delhi-NCR traffic. However, the serenity of this place has something, that allowed me to think about how these nomadic birds sleep while migrating all the way from Siberia, Russia, Turkey, and Eastern Europe.

Alas! I’m not the only one who comes up with such fantastic thoughts. For years, scientists have been suspicious that birds could sleep mid-flight, as several bird species can fly non-stop for weeks. On the other hand, some researchers propose that few birds can forgo sleep entirely while flying for extended periods of up to 200 days straight.

This time scale will lable a human insane, even if s(he) contemplates trying it out, Isn’t it? Humans along with many other species would experience irritability, hallucination, cognitive impairments, paranoia, and psychosis as side effects of sleep deprivation within 3 days or less.

So what makes birds’ brain so special?

Due to the lack of studies monitoring the sleep patterns of flying birds, the above hypotheses had previously been uncharted. Ratthenborg and his team in 2016, were among the first ones to pursue this question as they embarked on a red-eye flight to the Galápagos Islands; monitoring the brain activity of great frigatebirds (Fregata minor).

The great frigatebird is a fascinating model to study these questions as this species of large seabirds can spend weeks continuously flying over the ocean in search for food and shelter, and to my surprise without bumping into obstacles on its way. The team’s work provided evidence that birds do indeed sleep while flying.

How do they know that?

The team attached a lightweight, portable device onto the heads of frigatebirds, to track the brain activity. Their equipment used electroencephalography (EEG) to identify if and when the birds were asleep during the flight. After 10 days of non-stop flight, the birds returned to land, and the researchers recollected the devices to observe the results.

The team showed that flying frigatebirds display unihemispheric slow wave sleep (USWS). It is a unique capability of the brain, that allows the animals to doze off one hemisphere of the brain at a time. This way is allowing them to watch out for potential threats and roadblock through one open eye.

Other animals and birds are also equipped with such a superpower. For example, the Dolphins have been observed to exhibit USWS, letting them sleep while swimming. Also, on land, the Mallard ducks (Anas platyrhynchos) keep one cerebral hemisphere up and running letting the corresponding eye open, directed away from the fellow flock-mates, but toward potential threats. This way it has devised a safety net out of the use of USWS, when sleeping at the edge of their group.

If now you are thinking that this is the coolest part, wait for it.

Rattenborg and his colleague also found that frigatebirds continue to fly even when both the cerebral hemispheres are asleep, that means both the eyes are entirely closed. For simplicity sake, imagine it as some sort of autopilot mode. The monitored birds in this study, even experienced brief bouts of rapid eye movement (REM) sleep, although they lasted only a few seconds. They observed that during deep REM sleep birds head droops due to relaxed muscle tone, although this did not affect the flight pattern. Suggesting that the frigatebirds did sleep for brief periods in mid-flight (~ 42 min per day), they spent a majority of the flight awake and half-brain awake.

Admittedly, it still remains unclear how birds have adapted to function with such little amount of sleep. Nevertheless it opens up other questions like, why us and many other animals suffer consequences of sleep deprivation dramatically.

The cover image is made by a science communicator friend, Ipsa Jain. She uses arts and design to start conversations about science. Ipsawonders is one woman labor of love. She wants to create beautiful things that speak science

We publish using the Creative Commons Attribution (CC-BY) license so that users can read, download and reuse text and data for free – provided the authors, illustrators, and the primary sources are given appropriate credit. 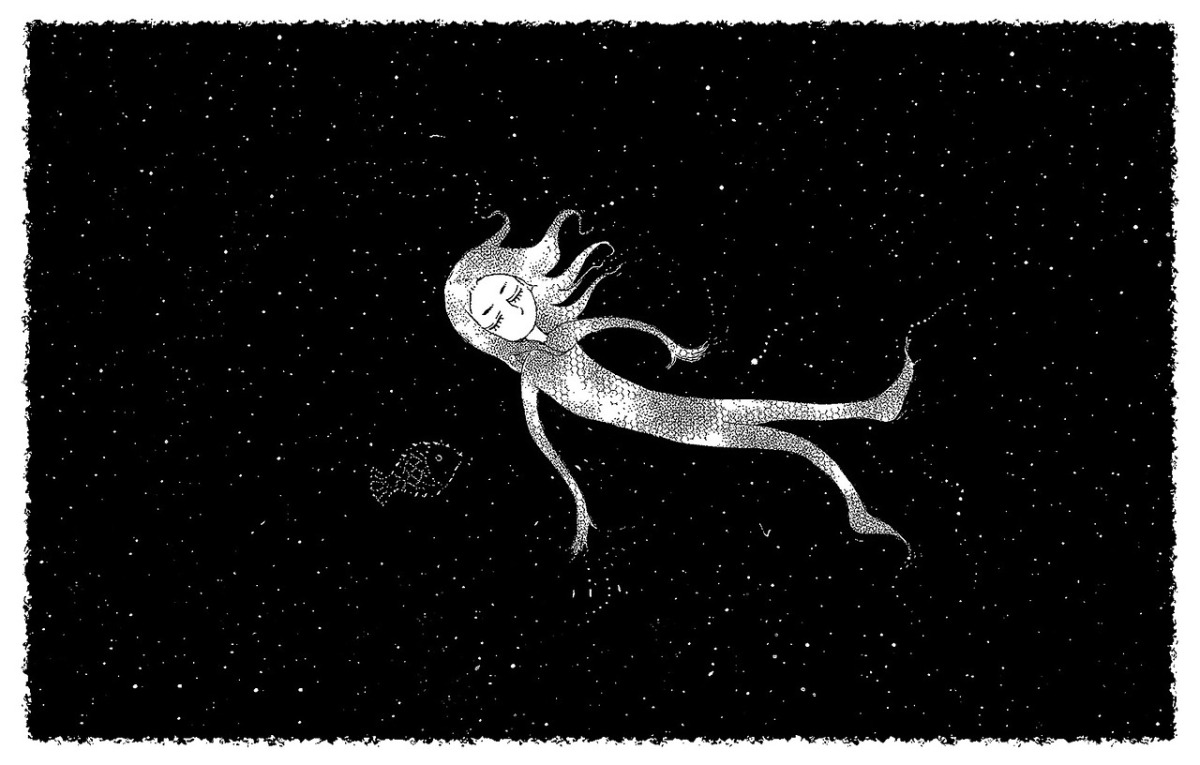 Well guilty as charged! I’m indeed one of those ‘lucky’ ones that you all envy. I can sleep through almost any din and bustle and wake up fresh as a daisy the next morning. Nothing, other than sudden hunger pangs at odd hours, can disturb my otherwise seamless slumber. The only exception was the night before my Ph.D. defense when I was woken up by a panic attack, and in my three decades of existence, that was probably the only time it happened. My reputation precedes me, and I’m referred to as Kumbhakarna in my close circle.

My sister, sadly, is exactly the opposite! The rustling of bedsheets, the softest tap on the door or the gentlest of breeze are enough to wake her up. She struggles to remain asleep while I snore away to glory in that very room, blissfully unaware of the mundane world around me. But what is it that makes me so impervious to noise? Is my brain wired differently and so responds (or doesn’t) to sound in peculiar ways?

I may not be reacting to sounds around me while I sleep, but the brain is always listening. It continues to register and process sound on a basic level, even when we are sound asleep. It’s actually good, because even though we may not react to all sorts of noise, a firm alarm wakes us up with a jolt.

One of the methods to understand our brain during sleep is electroencephalogram (EEG). It records the ‘brain waves’ which are nothing but the synchronized bouts of electrical activities from masses of neurons talking to each other either to execute a task or not do anything at all. To register these activities, scientists place electrode patches on the scalp of a sleeping person and record, especially from the brain’s thalamocortical system. As we progress through the different stages of sleep, our brain produces different types of brain waves. Every rise, fall, and jitter of these waves tell us a different story about our thoughts, emotions, and behaviors.

How much noise can disturb our sleep depends on several factors like which stage of sleep we are in. That is the reason why it is more probable that noises will wake us up from light sleep, rather than from deep sleep.

Interestingly, a study led by Thanh Dang-Vu and Ellenbogen found that for “sound sleepers”, specific brain waves may make them more tolerant to noise.

They did a tad bit mean experiment on healthy volunteers in their sleep laboratory for three nights. On the first night, participants could sleep blissfully in their comfy beds. However, for the next two consecutive nights, the researchers placed a speaker behind the beds and played everyday noises, such as alarm clocks or toilets flushing, at varying volumes and noted how loud noise had to be before arousing each person. All these nights Thanh Dang-Vu and team kept recording the brain waves.

They showed that brain activity in the face of noise is controlled by specific brain waves during sleep. In particular, waves called sleep ‘spindles’ prevent the transmission of sounds to auditory brain regions. In contrast, when sounds were associated with brain waves called ‘K-complexes‘, activation of auditory areas was larger, and individuals were prone to waking up.

In another study, Thanh Dang-Vu resorted to using EEG in combination with functional magnetic resonance (fMRI) imaging on 19 healthy individuals. The idea was to not just monitor the brain waves, but also to visualize which brain areas light up in response to sound during sleep. Here, he and his colleagues found that sound, when the person is awake, activates two main brain regions thalamus and primary auditory cortex. These responses persist during deep NREM sleep, except throughout spindles, during which they became less consistent. When sounds elicited a K complex, the activity in the auditory cortex was enhanced.

So, it could be that those who are blessed with more sleep spindles and/or less K-complex, could sleep even in a loud environment. However, during sleep, our brain produces both K-complexes and sleep spindles, depending on the stage of sleep. Therefore, our perception of the environment is not continuously reduced, it rather varies throughout during sleep.

Several other factors may make our brain respond to sound in certain ways as well. Like the time of the day when we go to sleep and even how we associate with specific sound itself. That’s plausibly why a parent can sleep soundly through their partner’s snoring but wakes up immediately when their baby cries at night.

So, the next time you lie tossing and turning in bed thanks to your teenage neighbour’s blaring stereo, you know who to blame for your ordeal.

This article is edited by Rashmi Guha Ray. She is a journalist from India whose undying passion for politics carried her to the western shores to study MA in Conflict, Governance, and Development in the University of York, UK. She is currently working as a research assistant in a project on migration. A trained editor who is hopelessly in love with words, Rashmi loves taking up new challenges in editing and rewriting.

We publish using the Creative Commons Attribution (CC-BY) license so that users can read, download and reuse text and data for free – provided the authors, illustrators, and the primary sources are given appropriate credit.